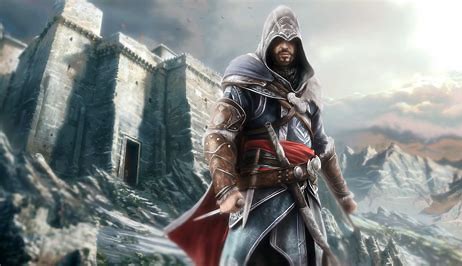 Da firenze means From Florence. Having your city in your name was common around the Renaissance.

Ezio Auditore is the Mentor of the Italian Brotherhood of Assassins|1503 - 1513.

Ezio was born in Florence Italy. When he was 17 his father, older brother,and younger brother were hanged. His families death filled him with vengeance and rage. He quickly found out his fathers secret life of an Assassin and found out that his families deaths were due to the Templars. He became an Assassin and quickly Rose in the ranks of the Assassins and became a master Assassin. He used the rage and skills to empower him to destroy the force that had destroyed his family. As a Master Assassin Ezio travled all over the world while gaining truth and further diminishing the Templars hold over different parts of the world such as many parts of Italy(Rome, Venice, Florence, Tuscany, Monteriggioni, Forlì) ,Syria(Masayaf), and Turkey(Constantinope)

Ezio is good at many things. He is good at Leading. He had to lead a whole underground organization that is rivaled by the Templars, which hold many different positions of power (i.e. The Pope). Ezio is one of the best characters in the whole franchise when it comes to combat and athletisism. Ezio is also pretty good at being a ladies man. He was described as a playboy by many that knew him in his earlier years. 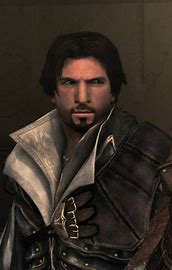 Ezio has also met many many historic characters in his life such as Leonardo Da Vinci, Rodrigo borgia (the current pope, Alexander VI), ceasare borgia, lucretzia borgia, jaun borgia, and so many more. The whole franchise is littered with history and historic figures.